The Tab is awarded to the top scoring 100 rifle and 100 pistol shooters who compete in the President’s 100 match each year at the CMP and when earned by military personnel, the President’s 100 Tab may be worn on the uniform of several branches of service. The National Guard had 16 recipients this year.

“President’s 100 tab is one of those things that not very many people earn. It signifies that you are at the top of that category as the go to person for marksmanship in a profession where marksmanship is everything,” said Spc. Andrew Traciak, National Guard All Guard Service Rifle Team member from Washington Army National Guard.

The President’s 100 wasn’t the only prestigious award won this year. 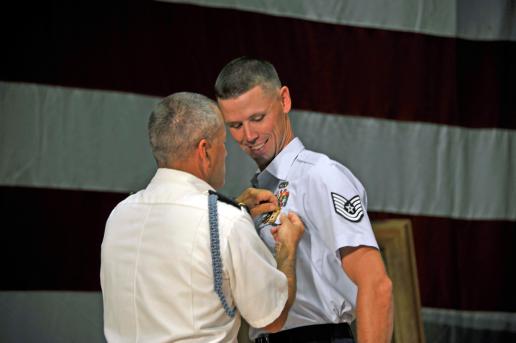 The President’s 100 Tab and the Distinguished Rifle and Pistol Badges are not often earned by military personnel and seen worn on the uniform, but when recognized, these awards identify them as being among the most elite marksmen in their service.”

Traciak may only be a specialist in the National Guard, but he is now officially one of the nations elite marksmen, and he has altruistic goals for his new proclaimed status as well as a vision for his State’s marksmanship program to “change the culture back towards focusing on marksmanship as a core competency to increase the lethality across the force as a whole.”

“My goal this year was making the President’s 100, and with that my primary goal was to be able to take this back to my State and talk to State leadership about helping other individuals get to this level,” said Traciak.

The Washington Army National Guard is currently rebuilding its marksmanship program, and Spc. Traciak hopes to influence the program to make their Soldiers more lethal on the battlefield.

“My state is trying to build a marksmanship program right now, and I’m trying to come in and assist the State with getting that program up and running,” he said. “I can take this back to my State, in a coaching position for a State training team or State marksmanship team and continue developing more coaches and shooters that could be utilized across the State to build force readiness amongst all of our other units.”

Staff Sgt. John Coggshall, a President’s Rifle Tab repeat recipient from Connecticut Army National Guard, explained what it is like being at the highest level of competition on the All Guard Service Rifle Team.

“When you get to our level, your gains in level of ability are minimal, but we still practice and gain more knowledge of troubleshooting and analyzing other peoples problems. It’s not as much about my skills; it’s making me a better teacher and instructor of others faster and more efficiently,” said Staff Sgt. Coggshall

Through the National Guard Marksmanship Training Center, the primary goal of the competitive events program and the All Guard Shooting Teams is to develop subject matter experts who take the advanced marksmanship training knowledge gained through competitions back to their regions and states to train, mentor and coach others to improve their marksmanship skills. Through this method the National Guard can more efficiently and effectively train the most Soldiers to increase force readiness.

Spc. Traciak summed it up saying, “We’re not exactly the Peace Corps. Our job is to go out, put rounds on target, and increase the lethality of the force.”