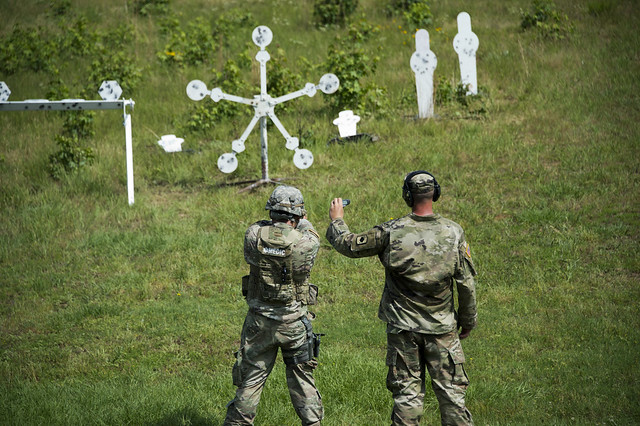 The Chief, National Guard Bureau (CNGB) Postal Match Championship is a competition that is sponsored by the NGMTC and promotes basic individual rifle and pistol marksmanship skills at the unit level by allowing participation by as many competitors as possible.

Phase I – Postal Phase. The postal phase gives competitors an opportunity to test their marksmanship skills against other Soldiers and Airmen in their unit and state utilizing the
Engagement Skills Trainer (EST) II or a 25m live fire course. Matches and results must be fired and forwarded to the NGMTC. Each Soldier or Airman can compete as many times as desired, but only one result can be submitted for scoring. Once submitted to the NGMTC, then no other results for that individual will be accepted.

Phase II – MAC Region Phase. Phase II is a paper aggregate match of the Phase I postal scores. NGMTC will receive all Phase I results, sort them by MAC region, and publish a results bulletin. The results bulletin determines the top four competitors per MAC.

Phase III – Shoulder-to-Shoulder Phase. This phase is a three to five day rifle and pistol live fire competition conducted at the NGMTC at Robinson Maneuver Training Center (RMTC), North Little Rock, Arkansas. The top four competitors per MAC Region in Phase II will receive automatic invitations to compete based on their Phase II placement. The individual winner of Phase III is the competitor earning the highest aggregate score, and is the overall CNGB Postal Match champion.

All Guard Team coaches and OICs may review the results of the Phase III Championships in
order to identify and invite promising shooters to one or more of the various team tryout events.
These matches, especially the Phase III competition, are excellent opportunities to learn new and
advanced marksmanship skills.